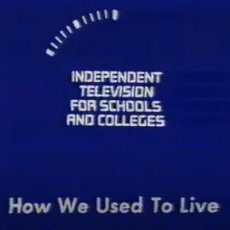 Remember when we used to watch television programmes at school?

If you were anything like us you'd all trundle off, in single file, to the television room 10 minutes or so before the programme was due to start and, having gone through the usual rigmarole of deciding who to sit next to, you'd wait for the television to warm up.

Ahh the joy of valves... remember those?  When the telly wouldn't reach full brightness for a minute or two after you'd switched it on.

The sitting-next-to decision process was a bit like an early form of politics or negotiation... with much wheeling and dealing to decide who sat next to the most popular people.

And after all the squabbling the end result was generally the same as it was last week... and as it would be next week... and also on the coach on any school trips.

What did we watch?

I remember a programme imaginatively called "Watch" in my early junior school days and then we progressed to "How We Used To Live".

Where they'd dramatically reconstruct out scenes from Victorian times, the First and Second World Wars etc.  It was a more interesting history lesson basically.

But the thing I remember most nostalgically about watching the tellybox at school had nothing to do with the programmes themselves... it was all about the waiting...

It was the countdown timer that they used to put on screen on both ITV and the BBC for the 60 seconds before the programme started.

They played music during the countdown too.  I remember that being pretty boring for much of my school television experience but, towards the end, the BBC (I think it was the BBC anyway) stepped it up a bit and played some really good (but definitely not anything of Top Of The Pops... that would be far too avant-garde) tunes.

My favourite BBC school telly countdown tune was "Daydream Believer" by the Monkees.  Can you remember yours?

Incidentally did you know that Davy Jones of the aforementioned "named after primates ensemble" had previously appeared as a character in Coronation Street?

And (I'm sure this is right but please no complaints if it isn't) that Mike Nesmith's (he was the one who always wore a woolly hat) mum invented Liquid Paper.

Rekindle any memories?  If so, please share them with the class!

29 Comments To "Watching Television At School"