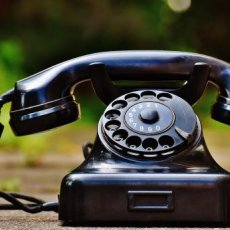 My mind has been wandering recently… thinking about things from when I was young.

Things that we didn’t think twice about at the time. Some were almost essentials.

But mention them to anyone under a certain age now… and you’ll just get a blank expression.

So I thought I’d share some of my nostaglic wanderings with you in the hope that you’d enjoy them… starting today.

Do you remember TIM, AKA the speaking clock?

Back before the days of mobile phones & tablets, radio controlled clocks etc

… and they had lots of flashing lights (or was that just on the telly?)

Heavens before even Teletext…

1) wait for the pips on the hour on the radio

2) phone the speaking clock (or TIM as we called it).

When I was little (late 60s early 70s) TIM was a lady called Pat Simmons. If you’re a child of that era I bet this takes you back…

In 1985 it changed to a gent called Brian Cobby. Typical of the 1980’s that’s when the iconic message

“At the third stroke the time will be 10.59 and 20 seconds” was amended to “the time sponsored by Accurist will be…”

I always thought that Brian sounded like the man who voiced over the Mr Kipling adverts.

And it seems that Mr Cobby was a little bit of a fibber (at least according to Wikipedia so please take this with a pinch of salt…).

He claimed to have voiced “5-4-3-2-1… Thunderbirds are go!” at the beginning of every Thunderbirds episode. And indeed he did, according to Wikipedia, create a recording of that epic countdown for the BBC in 1965.

Problem is… recording of Thunderbirds started in 1964… coundown and all!

So it’s thought that Brian’s recording may have been for a Thunderbirds Tracey Island toy (doesn’t have quite the kudos, does it?). Still at least we can be certain it wasn’t the Blue Peter cardboard, yoghurt pots, paper maché and Anthea Turner version!

Anyway, enough about what Brian didn’t do… want to be reminded of Brian’s golden tones? You can hear them here…