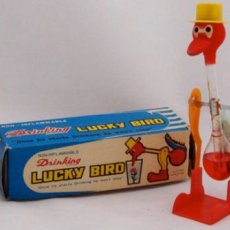 I was struggling to think of what to write about today.

And then... suddenly... it came to me.  I have no clue why because I wasn't thinking about anything particular... but once this flashed into my mind I HAD to feature it.

I think it's very 70s... though they may have been around after that too.  It seems to have come from an idea back in the 18th century which was refined over the years.

According to Wikipedia it's a heat engine that exploits a temperature difference to convert to a pressure difference within the device, and performs mechanical work."

But we just knew it as the Drinking Bird...

Again... according to Wikipedia... it worked like this: Gordon Bennett!  (do you remember when that was a common term of exclamation?)  Who'd have thought the drinking bird was so complicated?

13 Comments To "It Never Stopped!"