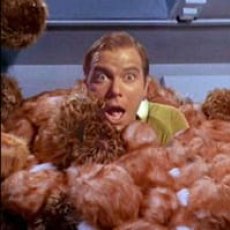 This morning I thought of a new challenge to set myself for these blog posts.

You know how they try to link a story to the previous one on some television programmes...

A segue I think they call it...

...and this time, to be topical, it's William Shatner who has just boldy gone into space some 55 odd years after he was doing it on Star Trek on the telly.

How to segue from Izal to William Shatner?

And no... I'm not using that link because it's too obvious and just too crude... shame on you!

Imagine what Frankie Howerd would be saying now, missus!

Instead I'll go with a joke that we used to think was hilarious when we were about 12...

What does the Starship Enterprise & toilet paper have in common? (the answer's at the bottom of this post)

I used to love Star Trek when I was little. The TV series only though... I never got into any of the films especially. 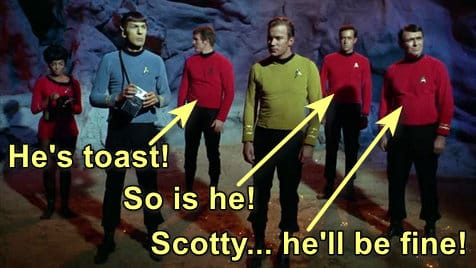 Each week you knew that 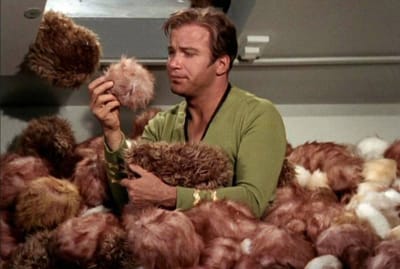 Do you remember the one with the Tribbles?

I'm sure we used to (occasionally) play a Spectrum game called "Trouble With Tribbles" which was based on that episode... oooh very good Michael... a stonking segue to my previous post about Sir Clive Sinclair, the inventor of the ZX Spectrum. (does anyone know what the ZX stood for, out of interest?)

Anyway, the Star Trek episode of the same name is something so bizarre and surreal that it's worth watching.

From memory, they were basically little furry "creatures" (stuffed toys) that reproduced at ridiculous rates and were in danger of taking over the whole USS Enterprise because there were so many of them.

Finally... joke answer time... I'm embarrassed because it's very lame but I just had to in the circumstances...

What does the Starship Enterprise & toilet paper have in common?  They both circle Uranus looking for Klingons.

Sorry!  To make up for that here's one final Star Trek treat...

Bring back any memories?