When I was little the Christmas countdown, excitement and excruciating “why are these pre-Christmas days taking so long when what we really want is to wake up on the 25th December” torture started around the 15th December for us. 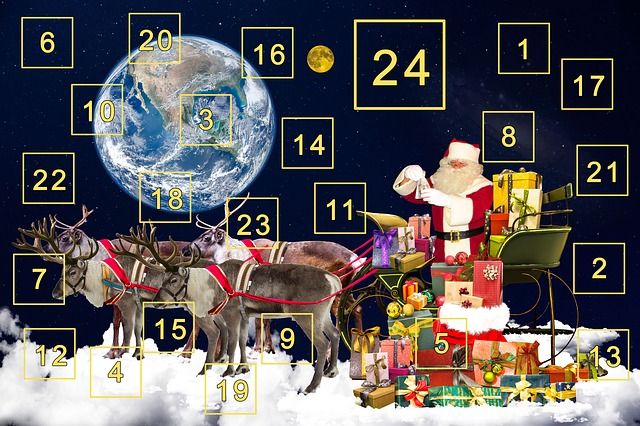 Yes, we had advent calendars from 1st December. And they were good… and all part of the ritual.

But we didn’t have loads of money when I was little so we reused the same advent calendars from year to year (true!)

Each year, when we took the Christmas decorations down, the advent calendars had all of their doors re-closed and about 11 months later they would re-appear to work their magic.

It didn’t matter to us… that’s all we knew and so it was just as magical as if we’d received a new advent calendar each year.

In fact it was probably even better, in its own way, because our calendars were like familiar friends… part of the Christmas ritual.

After all I wouldn’t have much to say about them had we had new ones each year. Where’s the nostalgia in new?

And let’s face it… if we’d been given a new calendar each year the images behind the doors would have been very much variations on the same theme… star, robin, snowflake, snowman, 4 french hens…

…or swans – no not swans because they aren’t a’swimming

…calling birds – or is it colly birds… and if it’s colly birds what are they anyway?

… anyway I know it isn’t a partridge because there’s only one of them and the image is severely pear-tree deficient!

(phew… back on safe ground… and don’t you dare sing “golden”… is nothing sacred?)

So if it wasn’t the advent calendar that really started the pre-Christmas excitement then what was it?

The making of the Blue Peter Advent Crown…

Think 4 coat hangers, tinsel, baubles and fork ‘andles (my little tribute to the 2 Ronnies… geddit?) and you don’t need a load of imagination to know pretty accurately what this annual masterpiece looked like. 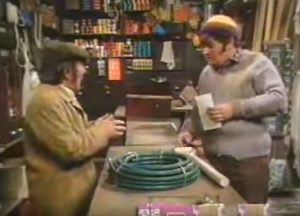 It was Valerie Singleton that was the chief maker when I was little I think… and then probably the honour passed to Lesley Judd (was less sure about her personally) and then, as the hosts changed with alarming speed, to more recent presenters who the BBC have wheeled in to make the program more hip and groovy! (ugh).

And not only have the presenters changed beyond belief but I’m sure that, last time I saw it, the advent crown has been made 2019 friendly and the candles (ooh fire hazard… they shouldn’t be on birthday cakes either, it’s a death-trap!) has gone. I forget what they were replaced with (I think I had my head in my hands at the time, ranting about “what is the World coming to?” interlaced with the occasional expletive… only mild ones though!!!)

Here’s a picture of that glorious Blue Peter crown that I found online. 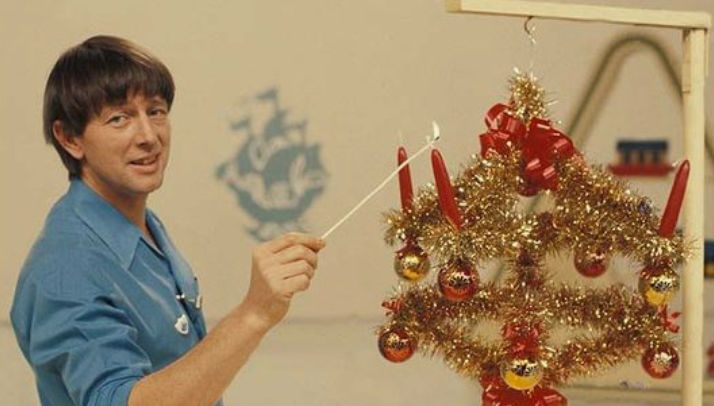 And having seen that picture I take back a load of the things I just said because look at the angle of those candles (including the one that’s just about to be lit). Were they mad? Is that an accident waiting to happen… or what???

Plus they are being lit by John “the man with the reputation for being entertaining because he was a bit clumsy, slightly inept – it anything was going to go wrong with anything Blue Peter did he would invariably be the cause or heavily involved at least” Noakes.

No… you’d get Peter “Mr Perfect” Purves to do it instead… wouldn’t you?

So what was it, that happened each year about now, that made us (well my sister Jane and me anyway) so excited back in the 70s?

I’ll tell you in my next post! (aren’t I a cheeky tease?)

I’ll tell you what, though. To make up for my teasing naughtiness, if you can guess what it might be then tell me in the comments below. If you get it right before I put my next post live at 11am next Tuesday (17th Dec 2019) then I’ll send you a fab wicker hamper of retro sweets in time for Christmas.

And if more than 1 person guesses then the first entry wins.

Search
Nostalgic Meanderings
The Chart Rundown
Did did you do this too on Sunday afternoons?.. Read More
My Saviour: A Bic Pen
They wrote well.  They leaked horribly.  But what else were they really good for?  .. Read More
CDs: You Could Eat Your Breakfast Off Them... Apparently!
They were unscratchable... and you could smear them with butter and jam, pour coffee over them... wipe'em down and then pay them. Because Tomorrow's World said so!.. Read More
The Legend Called William Shatner
Do you remember tribbles?  Or this song from 1987 that was number 1 for two weeks?.. Read More
The World's Worst Toilet Paper
There's one item from my childhood that stands head and shoulders above all others as being completely and horribly unfit for purpose... Read More
Bet You'd Forgotten This From Your Childhood... But What Is It?
What's brown and not very sticky?.. Read More
It Never Stopped!
Bird goes up, bird goes down, bird goes up, bird goes down..... Read More
Saturday Morning TV
How many Saturday morning tv programmes can you remember from over the years? Here's a load of them to rekindle some memories.  How many can you remember?.. Read More
Money For Old Returnable Bottles!
It's Frothy Man!.. Read More
Back To School Memories
Memories of going back to school after the long summer hols..... Read More
Toys In Cereal Boxes
Remember buying cereal just for the fab toy inside the box?.. Read More
Watching Television At School
​Do you remember this from when we used to watch television programmes at school?.. Read More
A Tribute To Sir Clive
Was he really married to a former lap dancer?.. Read More
Dynamo Bike Lamps
A pedal down childhood bikes memory lane!.. Read More
Kelloggs Rise and Shine
Remember this from the 1970s? It's orange juice... but not as we know it! .. Read More
All Articles
A Quarter Of Ltd...