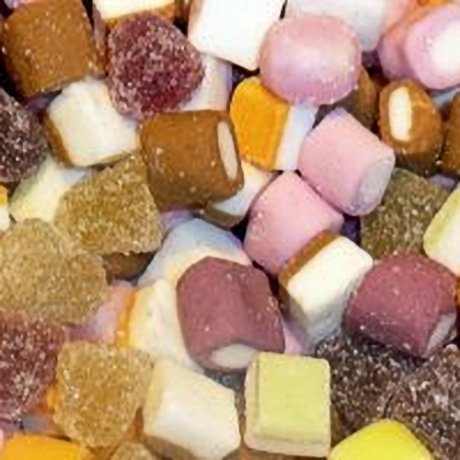 Dolly Mixtures - If you want to jump into a great big bag of nostalgia, then get yourself a quarter of Dolly Mixtures! They're so delicious, and so pretty, and did you know that they've been around since at least the 1920s...

Anorak time - according to the Oxford English Dictionary, a dolly mixture is a 'mixture of tiny coloured sweets of various shapes'. There are stacks of myths around relating to the origins of the iconic sweet, and nobody can agree on the exact date of origin. The story we love the best is this:

Many believe that they originated around the time of the British Raj in India. Dal or Dahl in India are pulses (beans, peas, legumes) which are often made up of different sizes and colours.... so could Dally Mixture have led to Dolly Mixture? A long shot I know, but we love a bit of intrigue here!

How Many Calories In Dolly Mixtures

No, this sweet is not vegetarian.

As proclaimed by the 1977 television advert, Dolly Mixtures are a firm favourite – not just with children but across the generations! The advert itself highlighted the wonderfully fun nature of this humble sweet – creating an edible kaleidoscope effect with the different shapes and colours of this versatile treat!

When it comes to classic sweets, they don’t come much more so than the unassuming Dolly Mixture! Dating back to at least the 1920s, this sweet shop staple is full of delightful surprises!

According to the Oxford English Dictionary, a dolly mixture is a 'mixture of tiny coloured sweets of various shapes' which perfectly describe this gorgeous little sweet – an array of different shapes, sizes, and consistencies, the Dolly Mixture compromises of a tasty selection of soft layered fondant sweets contrasting with sugared jellies! In fact, Dolly Mixtures are perfect for those who love the consistency of the famous Bassetts Allsorts but who aren’t fans of liquorice sweets...and for those amongst you who don’t believe  – yes, they do taste of different flavours!

Where does the name Dolly Mixture come from?

No one is quite sure where the name comes from, which we think adds to the fun! Whether it originated from a family nickname or Britain’s international links with India, all we do know is that this charming favourite delights all the family – truly a sweet that can be shared and loved by all!

Reminiscent of much simpler times, the Dolly Mixture has been produced by UK sweet maker Bassett’s since the 1950s. Not only that, but for us the humble Dolly Mixture reminds us of traditional sweet shops, spending our pocket money on sweets and also the much-missed Woolworth’s pick and mix!

A staple of British culture, often popping up in places you’d least expect, Dolly Mixtures can be used in a variety of ways, even bribery!

The Goon Show, starring British acting royalty including Spike Milligan, Peter Sellers, Harry Secombe, and Michael Bentine first aired in 1951 on BBC radio. This groundbreaking show influenced many that came after it, including Monty Python. During the episodes it wasn’t uncommon for character Bluebottle to be bribed with a quarter of Dolly Mixture to do things he didn’t want to do – could this be the new way of getting chores done around the house? If you try it let us know!

One for the book lovers, there is also a Dolly Mixture dispenser at the famous Honeydukes sweetshop in fictional Hogsmede in the Harry Potter series. Dolly Mixtures surely being a safter option than Bertie Botts Beans or a nicer alternative to Chocolate frogs!

Of course not! The Dolly Mixture can be used in a variety of ways including edible building blocks, children's training aids, and of course a beautiful way of decorating your culinary cake creations! Their colourful and varied nature can brighten any occasion including fun jewellety such as bracelets and necklaces, what better way to celebrate the understated classic, the Dolly Mixture.

So what are you waiting for?

Get this traditional family favourite in your basket and relive the glorious golden days of your youth with the glorious Dolly Mixture!

"5 star service once again. Order delivered promptly. Much kudos and thank you - my hubby will be very happy on his birthday."

"Excellent service in difficult times, love the sweets, all the sweets I had as a kid👍👍"