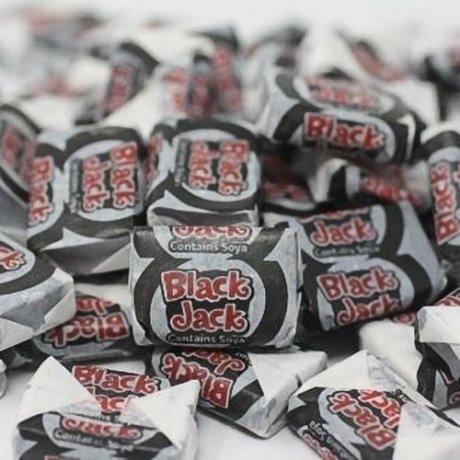 Black Jacks -  aniseed-flavour chewy black rectangles with a unique, delicious unique taste.   Plus they're vegetarian and gluten-free too!

Chomp on them and they make your tongue go black - so not to be munched just before you go out on that hot date!  They're truly one of the best classic British sweets EVER - we love them!

They used to be made by Trebor... that's Robert backwards!

Are Black Jacks Suitable For Vegetarians

I wonder where the name comes from? Well the answer comes from superstar customer Mike. Are you sitting comfortably? Then we'll begin....

Black Jacks Sweets were called Black Jacks because the original 1920s labels pictured a grinning toy - unbelievably, back then many images which we wouldn't dream of using today were used to advertise Liquorice.

By the late 1980s (yes, that recently amazingly) manufacturers Trebor quite rightly scrapped that Black Jacks logo as it was racially offensive, replaced the logo with an image of a pirate with a black beard and eye patch and re branded the sweets as Black Jack. And by the early 1990s Trebor disbanded the pirate logo altogether in favour of the the black and white swirl design we all remember.

In 2008, a confectionery company called Tangerine bought out Trebor and decided to change the design once more to the current plain black with red writing.... now the swirly black and white packaging we all remember is gone forever, although they still taste the same.... hooray!

These days when you think of Black Jacks you also think of another Barratt's sweet - Fruit Salads.  There used to be even more in the range too (some of which have sadly disappeared in the time that our online sweetshop has been up and running - sadly these days you can't savour the delights of Apple Jacks (I think you can probably guess what they tasted like!)

"Would love to give you 5 stars but unfortunately the order has yet to arrive. Not your fault I know. Can only sit and drool,at a social distance of course."

"The speed of response and delivery was excellent. The quality of the sweets are excellent."