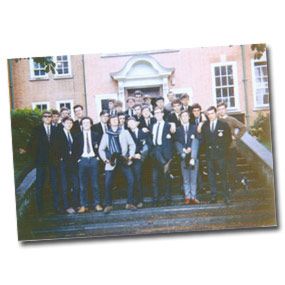 ‘I came from a village where more or less everyone went to the local church school from age five to fourteen then left. But my mother decided that I would go to a grammar school, so when the sixties began I found myself among this new lot of people, doing unheard-of things like learning Latin.’

‘When I was twelve, I made the decision that I would go into the commercial stream at school rather than the academic. After a year, I realized that this was utterly wrong, so I asked if I could change. And I was told no, of course you can’t.’ 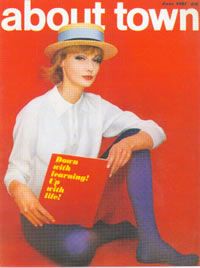 ‘Letter from a headmaster to parents, dated 1 September 1965:

“Dear Parents
In my opinion, there has been a decline over the past year in the attention members of the school give to their personal appearance. It started with this matter of hair. A few senior boys began adopting long, girlish hairstyles associated with some pop singers. This seemed harmless enough, and I expected them to grow out of it. But recently younger boys, falling under their spell, have copied them, and school as a whole has an increasingly unkempt look. Quite frankly, I am tired of seeing hair creeping over coat collars and over ears, down the face, and in a few extreme cases falling over the eyes, interfering with games and physical activity. With it goes a disregard for clothes and shoes, and at times a sullen look, taken, I imagine, from the popular image of what modern young people should look like…If your son is one of the shaggy minority, or one of those likely to copy those who are, I ask that you send him back at the beginning of next term with his hair cut reasonably short, and, with your encouragement, to take more pride in his appearance”’

Extracted, with permission, from The 50s & 60s: The Best of Times – Growing up and being young in Britain by Alison Pressley, publishedby Michael O’Mara Books Limited.

"I placed an order for some sweets for me & my wife, a jar for her & a box for me (we both have sweet tooths) they came very quickly. Even though there was an issue a replacement came the next day, Great service couldn't be happier!"

"Received our order in great time and the quality of the product is as good as ever. The site provides a great service and is good value for money"