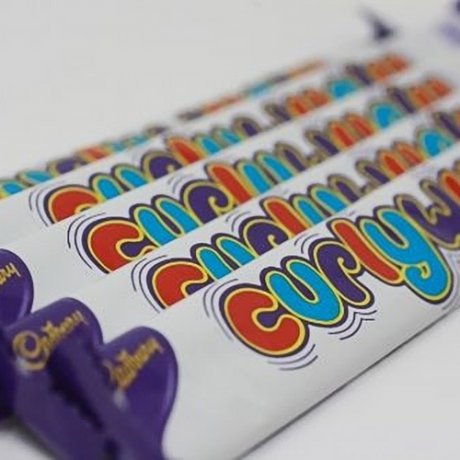 Cadbury Curly Wurly - possibly the best ever retro chocolate and toffee bar, with the best name (by far)!!! And on top of that, it's the bendiest, stretchiest chocolate bar in the World - Cadburys milk chocolate with a chewy caramel centre.

A bite of this, and you'll be transported back in time to the days when one of these chocolate coated chews at the weekend was a must... we love Curly Wurlys!

PS Remember the adverts on the television? The ones that ran in the 1970s in the United Kindgon featuring Terry (aka Penfold from Dangermouse) Scott? Classics!

What is in a Curly Wurly?

How Many Calories Are There In A Bar?

The Curly Wurly is a timeless classic of British confectionery that’s adored by young kids, nostalgic pensioners and everyone in between. If a friend ever tells you they don’t like Curly Wurlys, we recommend smiling politely and then running away, as anyone who talks such ridiculous nonsense simply can’t be trusted.

We don’t need to remind you what a Curly Wurly looks like, as we’ve all munched our fair share of the intertwined strings of chocolate-coated caramel over the years. Perhaps its most distinctive feature is the fact that it’s full of holes, which are there by design.

Similar to socks, the Curly Wurly bar is one of the few things in life that you actually want to find holes in, providing they’re in the right places. If you bought a Curly Wurly that was devoid of holes you’d be absolutely livid, and rightly so. After all, it’s these gaps that make a Curly Wurly so curly and, to a certain extent, so wonderfully wurly. Without the holes it would just be some flat bar of chewiness which, despite still being delicious, would bear none of the character that makes this snack-time favourite so enjoyable.

Back in 1970, a chap called David John Parfitt was a research confectioner at the Cadbury factory (best job ever). Having finished off another mouth-watering project, he had some toffee left over and decided to play around with it, as you do. What resulted was the Curly Wurly that we know and love today, which recently celebrated fifty years of being the twistiest chocolate bar around.
Good old Parfitt’s creation proved a big hit across the UK and has also been sold in many other countries around the world. Sadly it was discontinued in America quite a while ago, but it remains as popular as ever with British consumers and shows no sign of disappearing from sweet aisle shelves anytime soon.

Home of the Curly Wurly

Remember that factory we mentioned? It was set up by George Cadbury (a son of founder John Cadbury) back in 1879, four miles south of Birmingham. The village it was based in is called Bournville, a pleasant little place designed by the Cadbury family specifically for its employees. The aim was for one-tenth of the estate to be used as parks, recreation grounds and open space, which resulted in it becoming known as “the factory in the garden”. (The Bournville chocolate bar, released in 1908, is named after the village.) To this day, the Bournville site employs almost 1,000 people and every new chocolate product created by Cadbury begins its journey right there.

But anyway, back to the factory. These headquarters were later converted into apartments, with many of the building’s original features incorporated into the design. In 2020, one of the single-bedroom properties entered the market for £145,000 and the key marketing message was the opportunity to live where the Curly Wurly was invented. Whoever lives there now has an excellent ice breaker when hosting parties, which we hope include plenty of hors d’oeuvres shaped like swirly ladders.

Keep a Curly Wurly in your truncheon pocket
When we think of this particular chocolate bar, we can’t help but remember The Thin Blue Line. It was a sitcom set in a police station that aired between 1995 and 1996 (showing our age here), written by Ben Elton and starring Rowan Atkinson as the long-suffering Inspector Fowler.

One of the station’s officers was Constable Kevin Goody (played by James Dreyfus), a young man whose dizziness and lack of intelligence made him both a terrible police officer and possibly the show’s most-loved character. If there was ever a catchphrase associated with The Thin Blue Line, it must surely have been “Don’t bend my Curly Wurly please”, as the hapless constable always had one hidden on his person, namely in his truncheon pocket.

"Amazing customer service. I wanted a jar of sweets but with no sours in so emailed to see if this was possible and was told yes, no problem at all. The jar arrived within 2 days of placing the order and the sweets are amazing."