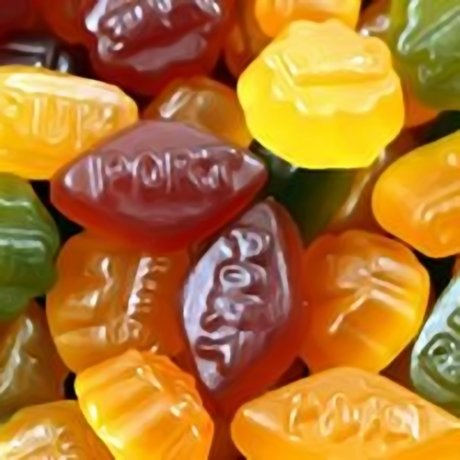 Lions Wine Gums - When it comes to Wine Gums, many of you say "Lions or nothing!"

Apparently, they're made according to the original Lions recipe (from way way back), and the way they're made makes for a firmer texture, and longer-lasting flavour (me, I just think they're jolly tasty!)

No, this sweet is not vegetarian.

Tags
Wine Gums have been around since 1909 (over 100 years ago), that's the ultimate retro sweet, and they have been one of the nation’s favourite traditional gummy sweet since. Made by Lion, who has been producing gum sweets since 1909 these Wine Gums are harder and more flavourful than other Wine Gums on the market. Lion doesn't cut corners on craftsmanship, quality, flavour, and texture with their iconic take on the classic Wine Gum.

Wine gums are the perfect sweet for in the car (who can remember munching on a bag during a family road trip?), a great accompaniment to your favourite film, or even just as a special treat.

Over 100 years later and Lion Wine Gums are still created with the original recipe – don't fix what isn't broken right? Comparing to old classic retro sweets such as Fruit Pastilles and Fruit Salad Gums, Lions Wine Gums are arguably above them all.

Best of all, with their all-natural colouring and no artificial flavours, our Wine Gums are suitable for the whole family to enjoy. Both those young and old can enjoy the extra fruity flavours on offer from a bag of wine gums.

The History of Wine Gums
Whilst Lion was one of the first confectionary businesses to manufacture and brand Wine Gums; everyone has their take on the classic ‘wine gum’ sweet. For example, Maynards Wine Gums are chewier and more come in slightly different colours and shapes. I suppose it is down to personal preference, but I prefer a harder sweet with a longer-lasting flavour, so Lion’s Wine Gums are my choice.

Do wine gums contain alcohol?
A question we often get asked is, do wine gums contain alcohol? In contrast to their name, Wine Gums contain no alcohol, but it is thought that their long-lasting fruity flavours are an attempt to make them almost like drinking and experiencing fine wine. The different colours of sweet are traditionally named after types of wines – hence the name. These typically were: Port, Sherry, Champagne, Burgundy, Claret, Rioja, Merlot and even Rum!

Why are wine gums called wine gums?
Wine Gums are fabulously fun, with a variety of colours and flavours. Traditionally they are made in five shapes: kidney, crown, rhombus, circle, and oblong - how many sweets come in the shape of a crown we ask? Not only that but they also come in a range of colours such as Red, Orange, Yellow, Green, White, and Black.

There is an age-old debate on the flavouring of Wine Gum sweets. Despite the strong fruity taste that Wine Gums have, some suggest they loosely replicate the flavours of various wines!

Can dogs eat wine gums?
Believe it or not, we have noticed that dogs can be partial to a wine gum or two. Now we wouldn't advocate feeding these to your dogs regularly or giving them a full packet to munch on, but the odd one as an extra special treat should be fine!