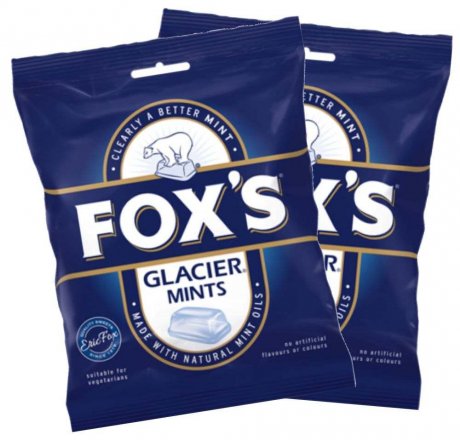 The iconic Fox's Glacier Mint was developed by confectioner Eric Fox in 1918 and over 100 years later this is still a firm favourite at AQuarterOf.co.uk. In 1918, the clear mints started to be produced on a larger scale and sold in glass jars and named Clear Mint Fingers! A bit fancier than your standard mints or paper bagged penny sweets - these are are your premium mints.

Everyone is familiar with the glacier mint. The uniquely translucent mint, closely resembling a miniature block of ice (or glacier) is a firm family favourite for both young and old. The brand mascot, Peppy the Polar Bear is often depicted proudly standing on a Fox's Glacier Mint on the packaging of these classic mints.

Not only do these mints look unique, but their taste is like no other mint. These peppermint mints, with their natural mint oils, give you a super-fresh, minty taste which is perfect for a long car journey, walk or simply to enjoy at home.

Containing no additional colouring, glacier mints are individually wrapped and great to eat on the go. They are perfect for popping a couple in your bag for later!

Originally first founded in 1880 in Braunstone in Leicester by Walter Fox, the company was first based in a Victorian warehouse. Fast forward to 1897, and Fox's were manufacturing and producing up to 100 lines of various confectionery - that's a lot of retro sweets!

In 1969, over 80 years after Fox's Confectionery was first established, it was acquired by the famous sweets manufacturer, Mackintosh. Just one year before the creation of the famous Rowntree Mackintosh brand. The headquarters of Fox's remains at its first location in Leicester.

Just under 20 years later in 1988, Nestlé purchased Rowntree-Mackintosh before selling the iconic Fox's brand to Northern Foods in 2001. Fox's was acquired by Big Bear Limited in 2003, and in 2015 it was obtained by Valeo Foods, which continues to own the brand today - that's a lot of owners for Peppy the bear!

The famous polar bear mascot icon of Fox's Glacier Mints is Peppy. Peppy was first introduced on the packaging in 1922. The character was drawn up and designed by Leicester artist Clarence Dalby, for just seven shillings and sixpence, (about £15 today). Dalby later went on to illustrate the original Thomas the Tank Engine books.

Around the same time, Fox's commissioned a taxidermist to obtain and stuff a real-life polar bear to display and to bring to large public events such as football matches, carnivals and fairgrounds as an advertisement for Fox's Glacier Mints. Travelling all over the country, Peppy is reported to have been joined by as many as four more stuffed polar bears.

You can now visit the original Peppy and offer him a mint in the Abbey Pumping Station Museum in Leicester, the city in which the company was founded.

There are a few other varieties to the Fox's Glacier sweets line. Fox's Glacier Fruits contain a selection of super fruity, rich, and juicy flavours (Strawberry, Blackcurrant, Orange, Raspberry, Lemon, and Lime) and were introduced in 1956.

There have been many other limited-edition flavours of Fox's mints including Pop Bottle Favourites and Fruit and Spice. To celebrate the 100th anniversary of 2018 Fox's released Spearmint and Tropical flavours (we loved them both!).

Fox's Glacier Mints are a true favourite with history and nostalgia aplenty. There's no other mint on the market like them with their super-fresh, peppermint oil taste (if you love peppermint have a look at Fry's Peppermint Cream) so why not buy a bag now and treat yourself to a burst of fresh, minty flavours.

"I have been using your service for some years now and you have never failed to provide an excellent service from easy website, being kept informed of delivery and how quickly order is sent out. Great packaging and the sweets are fabulous."