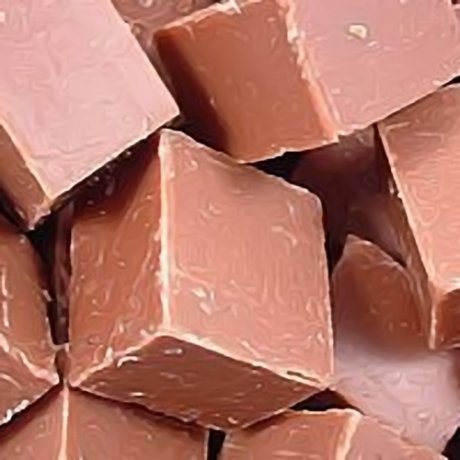 Description
If you are a fudge fan and also a chocoholic, then look no further than our chocolate fudge. Two of our favourite sweet treats are chocolate and fudge. Whoever first decided to put them together must have been a genius, as chocolate fudge is guaranteed to put a smile on your face!

Now, if you are a fudge fan and also a chocoholic, look no further!

Our choclate fudge is simply stunning. A double-whammy of deliciousness... rich, creamy fudge with a nice dollop of chocolate added in for good measure. Made especially for those of you who like fudge, and ADORE chocolate. It's jolly good!
ALLERGENS & NUTRITIONAL INFORMATION

No, this sweet contains gluten and is not suitable for people with Coeliac or Celiac Disease.
Customer Reviews

Tags
Contrary to popular belief, Fudge originated in the US during the late 19th century. One origin story contains a confectionary maker who "fudged" the recipe for some French caramels - low and behold, Fudge was born!

Nowadays you can buy fudge in an array of flavours, colours and even textures but the most popular flavour is Chocolate Fudge by far. Indulgence and super-rich in flavour, a taste of Chocolate Fudge is a little chunk of heaven!

Most people have their very own family recipes for chocolate fudge, but we have you covered if you don't have time to make a batch for a party or event. Better yet, our top-quality Chocolate Fudge contains no artificial colours or flavours. So, rest assured that you will be receiving some of the best fudge in the land!

The exact origin story of Fudge isn't 100% clear, but we do have records of recipes for Fudge dating as far back as 1886. The originally recorded recipes for fudge were very precise with measurements and cooking times to achieve that perfect smooth melt in your mouth fudge that we all love today.

Another one of the earliest recorded origin stories dates back to the 1920s. A student at Vassar College by the name of Emelyn Battersby Hartridge (class of 1892). She had written a recipe for Fudge that she had made in her dorm room and sold at the college campus. It became a trend and many more women started making fudge in their dorm rooms in the evenings using Bunsen burners or gas lighting fixtures.

Fudge Facts
If Chocolate Fudge isn't quite what you fancy, we have plenty of other Fudge flavours to choose from. My personal favourite, Rum and Raisin Fudge is perfect if you like fudge with a bit of texture. One of the best flavour combinations, all mixed up in smooth and rich Vanilla Fudge. If you are a fan of Rum and Raisin ice cream, you would be missing out if you didn't try this winning flavour in fudge form!

Looking for something a bit more out there? Vanilla and Custard Fudge isn't for the faint-hearted! Custard flavoured nougat, coated in creamy vanilla fudge - you'd be a fool to miss out on a chunk of this. Inspired by the classic Custard Slice, this was first introduced centuries ago and is now available in today's amazing world of fudge flavours.

If you are a fan of choclate fudge and are partial to a bit of peanut butter then don't forget to check out our Peanut Butter Chocolate Fudge for the ultimate indulgenent treat!

"A great way to buy a treat that reminds you of youth. A very good service keep up the great work"