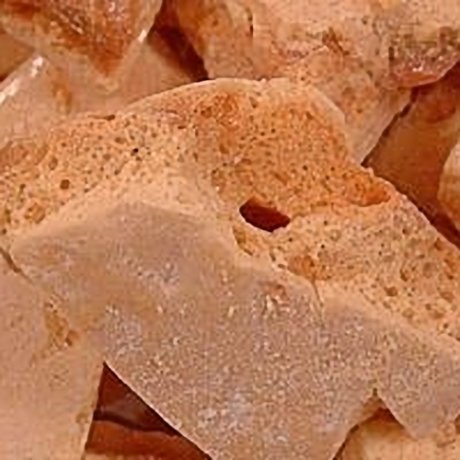 Yes, there are no ingredients in this sweet which are derived from animals.

Tags
Cinder Toffee dates right back to the 1920s, but the original recipe is pretty vague - some people even think Cinder Toffee was around in the mid-1800s! I guess we’ll never know the true origin date, but what we do know is this sugary, light, sponge-like treat is loved by both adults and children alike. It's one of the few sweets that is undeniably ‘World Famous', we love a classic retro sweet and it doesn't get much more retro than Cinder Toffee!

Depending on whereabouts you are in the world, Cinder Toffee can go by many different names. Honeycomb, Sponge Toffee, Hokey Pokey Toffee, Puff Candy, or 'that stuff you get inside a Crunchie bar' are just some of the names we have come across in our time.

To ensure you can always get some of this light, crisp and chewy goodness no matter where you are, below is a helpful list of regional names, Cinder Toffee is a true global favourite
How to make Cinder Toffee
Fancy giving it a go yourself?

Below is a simple Cinder Toffee recipe you can follow that should give you the delicious, finished product in just 30 minutes.

Step 1
Grab a baking tray, around 8-12 inches should be fine. Make sure to grease the tray with butter and then add some parchment paper so it covers the bottom and the sides of the tray. Grease the parchment paper with the butter

Step 2
Mix the sugar, golden syrup in a saucepan and gently heat until the sugar has melted, then bring to the boil. Simmer until the mixture turns into a golden, caramel colour...this won't take long!

Step 3
Now this is where speed is important (but be careful, the mixture is extremely hot). remove the mixture from the heat, add the Bicarbonate of Soda and stir. Then as quickly (but carefully) as possible, pour into the baking tray.

Step 4
Now the simple bit. Just wait for the mixture to cool. once the mixture is set, break up the Cinder Toffee and serve.

Of course, you could save yourself all of that time and effort by simply ordering from AQuarterOf.co.uk

The Cadbury Crunchie
You could be forgiven for only knowing what Cinder Toffee is because of the iconic Cadbury’s Crunchie Bar, and who could blame you – it’s an absolute great and can also be purchased right here at AQuarterOf.co.uk. As the famous slogan goes, get that Friday feeling any day of the week!

English Toffee Day
Whether you’re planning on making or eating some Cinder Toffee, what better day to do this than National English Toffee Day which is celebrated on January 8th every year. Make sure to use the hashtag #EnglishToffeeDay and tag our Facebook page so we can celebrate too!

"Great sweets, great service, what more could you want"