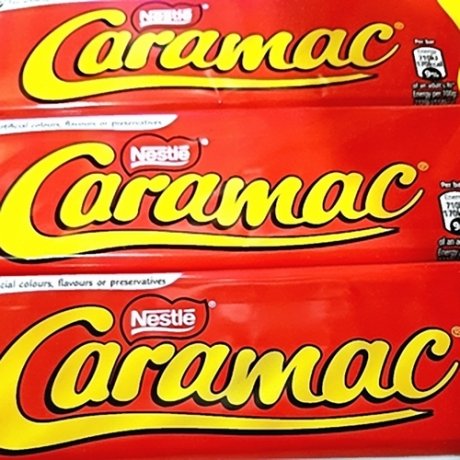 Caramac Bar - Nothing tastes quite like the rich golden creaminess of a Caramac!

Who can forget the distinctive red and yellow wrapper (which takes us back to the 70s), but more to the point, who can forget that lovely caramelly, melt-in-the-mouth taste of caramac chocolate?

Stacks of people think it disappeared years ago, but we're over the moon to say that it lives on, and it's one of the stars here at A Quarter Of.

No, this sweet contains gluten and is not suitable for people with Coeliac or Celiac Disease.
Customer Reviews

Caramac bars are one of the things which many of us remember extremely fondly from our childhoods, and for good reason! These bars were extremely distinctive, with bright colours and bold font covering the front of the bar. That lovely swirly yellow text is enough to set the mouth-watering, and whether or not these were a part of your childhood, we can pretty much guarantee you’ll love them!

Many people believe this treat was lost in history, but Caramac chocolate is still being produced today and is available from AQuarterOf.co.uk in packs of 6! - wonderful news for its thousands of fans.

As the name suggests, Caramac bars are delicious caramel flavour, without any of the inconvenience caramel causes when it gets squashed in the bottom of your bag or its chocolate coating melts. They were originally produced by the famous confectionary brand Mackintosh (the company then became part of Rowntree Mackintosh), and were introduced to the United Kingdom in 1959 – yum, what a good year that was for British confectionery!  These days, they are produced by Nestle, but they’ve still got all the silky goodness of the original sweet.

These bars are so popular that a similar coating is used for the McVitie’s Gold bar, and there was a Caramac Kit Kat released in 2005. It was intended to be a limited edition, but it was brought back in 2007 because it was so well-loved. What a surprise! We think that Nestle should have seen that one coming!

Of course, some people will remember the Caramac Easter Egg, produced in 1987. Wow, that was a good one, with beautiful shiny paper and a lovely box with printed characters. Don't fancy a full bar? Caramac buttons are a brilliant alternative and a great cinema or picnic treat.

Caramac’s delicious blocks have the brand name printed in that distinctive, curly font on the front of each, which is a wonderful nostalgia hit for those of us who remember munching and crunching on them as youngsters. It was named through a competition, won by a woman called Barbara Herne, and – as you may have guessed – is an abbreviation of caramel and Mackintosh. What a clever lady she was! The competition was held in Mackintosh’s Norwich factory, and the bar was produced there until the factory closed in 1996. After that, production moved to Fawdon on Tyneside, where it’s still being produced – thank goodness this treat didn’t disappear along with the factory!

In terms of Caramac ingredients, they tick quite a few of the boxes. Contrary to popular belief, the honourable Caramac bar isn't a chocolate-based candy. This has been a topic of debate for decades but if you look carefully, there is no cocoa in sight! They do contain milk, but they’re egg free, nut free, gelatine free, and suitable for vegetarians. We do always recommend double-checking the ingredients list, but this is a perfect treat for anyone who’s trying to avoid gelatine or who suffers from allergies. It’s a “may contain” for gluten, so may not be suitable for people with Coeliacs, but with a relatively short ingredients list, there are much worse sweets you could be buying! Condensed milk as the sweetener really adds to that rich, creamy flavour so many of us know and love – and so many are yet to fall in love with!

How about Cadbury’s Caramac? Well, they call it Caramilk, and it causes some mixed opinions. Some people love it, some hate it – perhaps depending on whether or not they’re precious about the original bar! Cadbury’s Caramilk isn’t quite Caramac, in our opinion, but it’s great that there are options out there to suit everyone’s tastes!

Of all the “bar” sweets to have survived from the retro era, Caramac might be one of the most deserving. It is easy to eat, tidy, has smart packaging, minimal ingredients, and a wonderfully distinctive taste that will satisfy any sugar craving. The buttons are also a great invention, perfect for sharing out among kids if you don’t want them ricocheting off the walls all evening, and ideal for a cinema treat.

With such a unique and distinctive taste, we're glad that Caramacs are not just a distant childhood memory and are around today. A retro cult classic that will hopefully be around forever!

"As usual I received my purchases quickly, & beautifully bagged. We thoroughly enjoyed remembering our childhoods, whether that was the 50's & 60's, or in the case of my children, the 90's. Delicious."

"The full jar of pontefract cakes proved to be the ideal birthday treat for my sister who was delighted. Thank you for the prompt delivery that meant it reached her on the day!"